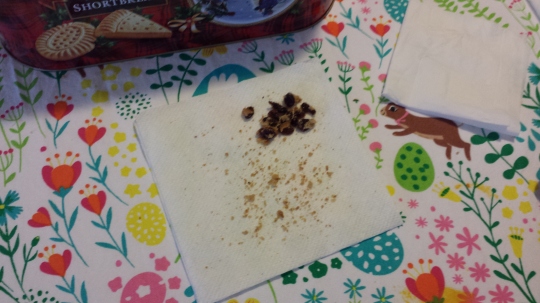 Me: Then why did you take all the raisins out of your cookies?

Me: Yes, you have oatmeal raisin cookies. Those are the raisins.

Mom: Oh. I thought they were just junk.

Me: Why would they put junk in your cookies? They’re raisins!

Me: Mom! Why are you still taking the raisins out of your cookies?

Me: WHY ARE YOU STILL TAKING THE RAISINS OUT OF YOUR COOKIES?

Mom: Because I don’t want them.

Me: Do you want me to buy you different cookies that don’t have raisins?

Mom: Do you want them?

Mom: No, these are fine.

My husband is doing yardwork today, which means he has the garage all disarranged with bikes and mowers and all kind of things in the normal walkways.

I am in the office and hear my husband’s voice yelling, which tells me that he is trying to convey some kind of information to my mother. Upon investigation, I find that she wants to get the laundry basket from the garage in order to gather up her dirty laundry, and even with all the clutter in the way, doesn’t quite understand why she can’t just get the basket and get her laundry going.

After a few minutes, I remember that she has her own laundry basket, purchased specifically for her, as the latest in a series of attempts to keep my Clean Laundry basket  used for only clean laundry.

The first volley in this on-going battle happened several months ago, when I found the Dirty Laundry basket (normally kept on the floor of the garage) sitting on top of the chest freezer filled with my clean laundry Mother had helpfully removed from the dryer. In an attempt to keep this from happening again, my helpful husband got out his trusty Sharpie and labelled it.

We thought that took care of the issue, until I realized Mom was using the Clean Laundry basket to carry her dirty laundry from her room to the garage. My helpful husband again pulled out his trusty Sharpie, resulting in both baskets being labelled.

It also occurred to me that the hamper Mother had in her room might be too unwieldy (sample pic below – hamper is already gone). 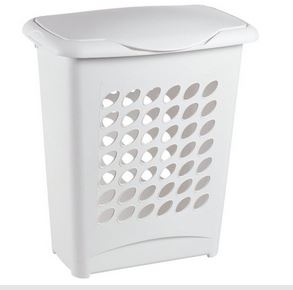 So, I purchased a smaller basket for her to use for her laundry, took the hamper away and placed the basket in her room.This is what is looks like today: 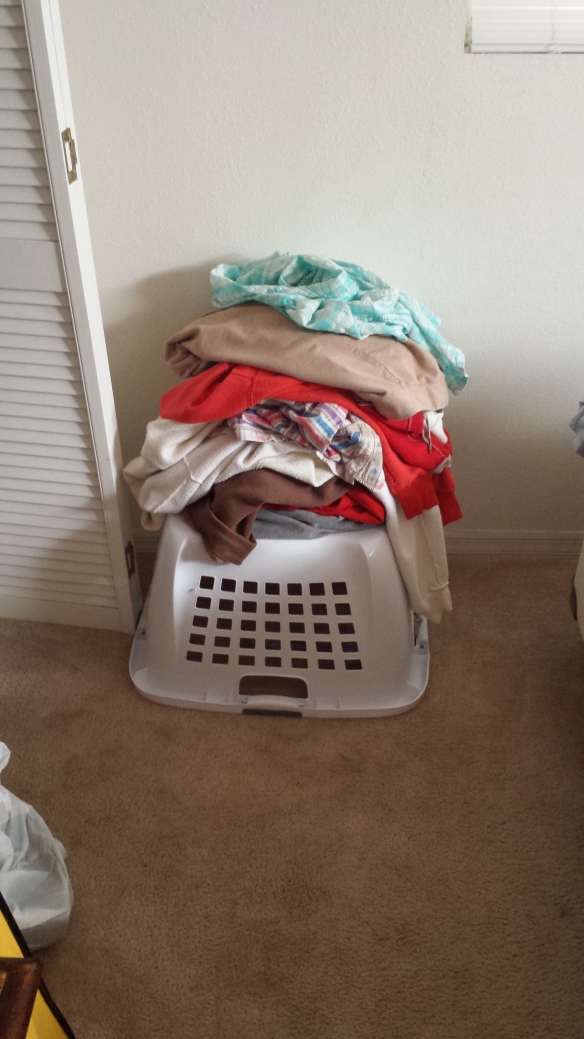 This afternoon, I’ll be making another trip to Target, this time to purchase a set of wall hooks for my very helpful husband to put up just above the basket in Mom’s room. All I have to do is get Mother to buy into the idea of using them instead of piling all her clothes, some of which she “might want to wear again”, on top of upside-down basket. Oh, and using her own laundry basket for her dirty laundry so she’ll leave my Clean Laundry basket alone.

I was at a presentation over the weekend about Native American music. One of the presenters mentioned having had a DNA profile done a few years back by Ancestry.com for about $200. I came home and looked it up and now it’s only $89!

Mom has always talked about how much her dad showed his Indian blood and how she inherited his olive complexion and brown eyes, while both of her sisters had blue eyes like their mother, and I’ve always wondered about my possible Native American background.

Mott Moore c. 1950s – He looks like he could have been in one of those old westerns, right?

But now, as I’m typing this, I realize that the story I heard from my mother’s uncle about his grandmother, who would have been Mother’s great-grandmother, being full-blood Cherokee, was on her mother’s side of the family!

Okay, now I’m REALLY interested in checking out this DNA test thing. Order the kit for $89, spit in a tube and send it back, and get a breakdown of your ethnic heritage. This has now taken a spot on the WANT! list above those bright-and-shiny earrings I’ve been eyeing.

In Tampa, Mother attends the Adult Day Care program provided by Pinellas County’s Neighborly Care Network three times per week. Since she has attended at three different locations over the past 4 years, we just call it “The Senior Center” rather than trying to remember a new name each time. She loves going, loves the activities, and I love seeing her look forward enough to it to take the initiative to set her alarm and get herself up and medsed and coffeed and cookied in time for their van to pick her up around 8:00 a.m. on the days she attends. At home, since she attends while I am at work, it is less a respite for me than it is an enrichment for her. If she were just left alone at home all day, she would do nothing but lie down on the couch, dozing and watching the Encore Westerns channel, until it was time to make her sandwich for lunch. After lunch – back to the couch. Even though the physical therapists told her that lying down all the time is what contributes to her poor muscle tone and poor balance, she will not sit up without me being on her all the time about it, and life is too short for either of us for me to have to be the couch/pillow police all the time.

So, 3x per week at the Sr. Center is a definite help and enrichment for all of us. When she’s at home, she is on top of all of her ADLs (except bathing, and the bath lady comes every Tuesday) and since she watches the evening news, is generally more informed on local and national events than I am. When we got on the road for our Thanksgiving trip, however, all that structure and memory support was removed and it was like every day was a new day. She had a hard time realizing that while we were spending Thanksgiving Day at my niece’s home, we wouldn’t be there all week, and wouldn’t be sleeping there at all. She had a hard time remembering what day Thanksgiving was on. Every time it’s time to get back into the truck, she asks what side she’s supposed to get in on, even when Steve is standing beside the open door with the extra platform step set up beside it. She asked several times how long we would be staying in our hotel, and seemed surprised and amazed every single time she learned the answer was “six nights”.

The day before we were planning a busy day running around, one that I knew would be challenging for her, Steve and I were reading in the hotel room (with the tv muted and closed-captioned for her) when she said to me, “Look at all this money!” I looked up to see that she had gotten Steve’s wallet off the desk, opened it up, taken out all the credit cards, and was then marveling at our travel cash. At that point, I realized our plans for the following day were really beyond what we could reasonably expect for her and I started looking for some kind of respite placement. An internet search led me to the Scenario Adult Day Services near Bachman Lake in Dallas. I called and spoke initially to Ricky who was very helpful and encouraged us to come over that afternoon for a brief tour. We met with Miss Elizabeth (I forgot to get her card, so I don’t know her last name) who had us fill out some paperwork, had the nurse perform a brief health assessment, and helped us set up for a respite day for Tuesday.

They have two buildings with separate programs, one for the elderly, where Mother attended, and the other for younger adults in need of daycare services. We were concerned Mom would object, but it has been pretty cold here this week, and when we said we would be doing a lot of walking around, and then referred to it as “The Dallas Senior Center”, she didn’t seem to have any objections. We dropped her off, and after running several errands and having lunch with a friend, we got back to the center in the middle of Bingo. She didn’t even notice we were there until that Bingo game was over. Later I asked her if she had enjoyed playing and she said yes, but she was disappointed they didn’t have any cookies for prizes. Oh, well.

Thank you, Ricky and Elizabeth and Scenario, for providing Mother a safe, fun place for the day and a bit of respite for all of us in the middle of our 9-day Texas Thanksgiving Odyssey 2013.