Archive for the ‘art’ Category

Three mornings per week, a van or car comes to our house and picks Mother up to take her to the Dunedin Day Center. They sing songs, read the paper, play Bingo (sometimes Mother brings me the packages of cookies she’s won), and lots of other activities, including breakfast, lunch, and a mid-afternoon snack before she comes back home in the afternoon.


Sometimes she brings home artwork that she’s done. Some projects are more impressive than others. Below is one of the first things she brought home and taped to the living room wall.

Soon after, this appeared below it.

Later, this painting appeared, and I was actually quite impressed. 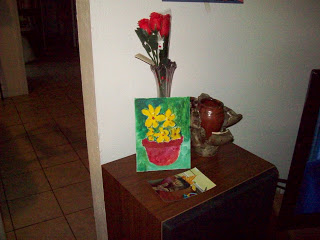 Then came Christmas arts and crafts. (She won the candy jar by being the most accurate guesser of the number of candy canes it held.)

Several more paintings came home, and I was getting quite excited about Mother’s previously hidden artistic talent until she told me that the canvases had pencil drawings they then painted.  Still, she seemed to have a good sense of color and blending, and I’ve purchased inexpensive frames to showcase the growing art collection. When they’re all framed, I’ll be able to replace the Easter basket she’s taped up in the dining room.