Three mornings per week, a van or car comes to our house and picks Mother up to take her to the Dunedin Day Center. They sing songs, read the paper, play Bingo (sometimes Mother brings me the packages of cookies she’s won), and lots of other activities, including breakfast, lunch, and a mid-afternoon snack before she comes back home in the afternoon.


Sometimes she brings home artwork that she’s done. Some projects are more impressive than others. Below is one of the first things she brought home and taped to the living room wall.

Soon after, this appeared below it.

Later, this painting appeared, and I was actually quite impressed.

Then came Christmas arts and crafts. (She won the candy jar by being the most accurate guesser of the number of candy canes it held.)

Several more paintings came home, and I was getting quite excited about Mother’s previously hidden artistic talent until she told me that the canvases had pencil drawings they then painted.  Still, she seemed to have a good sense of color and blending, and I’ve purchased inexpensive frames to showcase the growing art collection. When they’re all framed, I’ll be able to replace the Easter basket she’s taped up in the dining room.

Last summer, I took some of the edgers that were stacked on the side of the house and blocked off a little garden area.  I decided to plant sunflowers. I started the seeds in little plastic pots on the lanai, alternately overwatering and ignoring them.  The survivors made it into the flower bed.

They grew pretty quickly, benefitting from the fact that Steve kept reminding me to water the tomato plants.

We got some nice blooms on them and even some bees visiting! 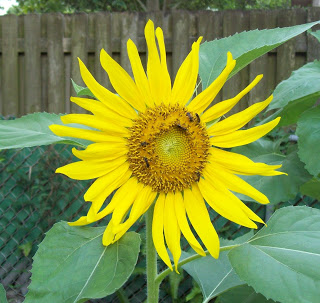 It soon became evident, however, that the extreme rockiness of the soil did not allow them to get a good root system going.  Even though Steve tried staking and tying them to help them stand upright, they never got strong enough stems to support or nourish themselves. Not one of the flower heads set seeds. 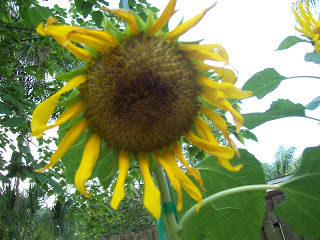 I did enjoy watching them grow, even if they didn’t do as well as I had hoped.