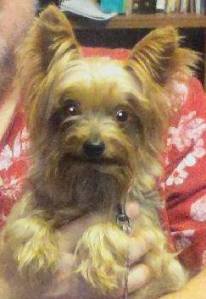 We recently added a new family member to our household. She is 5 years old, retiring from a breeder after having her requisite (for this breeder) three litters. She has never been anywhere but the breeder’s house and yard, so she’s taking a little while to get used to us, to her doggie-sibling, Gracie, and to the entire concept of harnesses and leashes.

Before we went to pick her up, I told Mother about her, and that her name was Fiona. Since Mother mostly reads lips, and she evidently has never heard this name before, she looked at me funny and said “Veeoga?” After I wrote it down, she said it correctly, but still looked quite puzzled. By the time we had had Fiona a couple of days, Mother had asked her name several times and mispronounced it in several unique ways. At one point, I looked down at the little dog, and the name “Sophie” popped in my head. Doggie telepathy, maybe? Anyway, it seemed closed enough to “Fiona” to not be too confusing for her, and perhaps a name Mother could better remember. When I told Mom the dog’s name was now going to be Sophie, she said, “Well, that’s better than Fie-ona.” And so it is. A couple of days later, Steve was scanning our bill of sale and noticed that the breeder spelled “Fiona” as “Phonia”. She said her daughters named the dogs after Disney princesses. I guess Mom wasn’t the only one to have never encountered that name in real life.

So, now, Sophie has been fixed (the breeder refunded us almost half her cost upon proof of spaying), had her teeth cleaned, got a few bad teeth pulled, got her jingle jewelry (county registration/rabies tag), and is almost fully recuperated. After being pushed in and out through the doggie door several times, she has managed to let herself into the house through it, but hasn’t felt a strong enough desire to use it to go out, so I’m still trying to monitor her closely enough to save myself from having to clean up tiny doggie messes.

Gracie has gotten over her severe jealousy and now is only playing the normal version of “don’t pet her, pet me”, rather than the spastic, shed-all-my-hair-and-drool-on-you version. She has also tried to get Sophie to play a few times, but Sophie is still very skittish with all of us. She follows me around, but won’t come to me. The best she’ll do is stop a few feet away, and then not immediately run away as I approach her. And that’s not consistent. The breeder said she was a cuddler, so I’m hoping it won’t take her too much longer to get used to us and actually try to get us to hold and pet her. I’m ready for my new lap dog to actually want to sit in my lap.